Home » Blog » Just a Thought: The Playground of Today 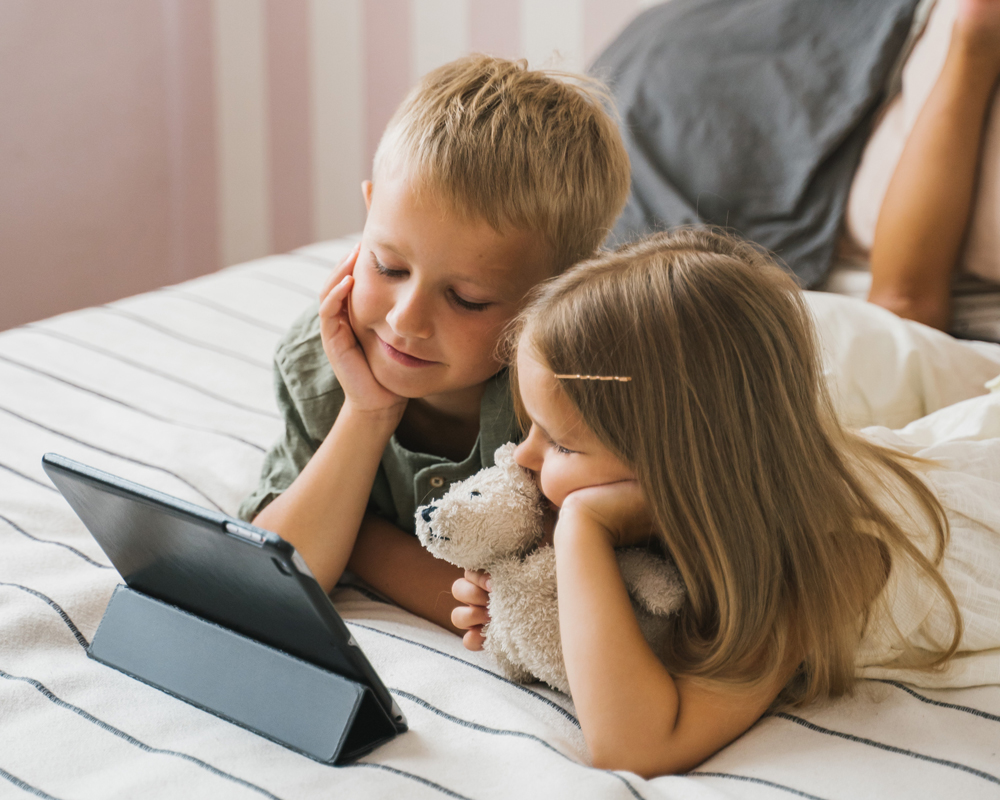 Children and teens are growing up in a constantly changing and fast-evolving digital world and the tangle of technology’s wires is tightening around them a little more each day.   Televisions in doctor’s offices, touch screens on airplanes, tablet cases with teething rings, potty chairs wired for a tablet, and a digitalized voice known as Alexa next to their bed, reading a bedtime story, are just a few examples.  Technology has become their playground, leaving behind the outdoors and personal connection to a 3-dimensional world.

In one study funded by The National Institute of Health, “more than 45% of the television screens in our homes are connected to the Internet.”  Forty percent of infants, at three months old are regular viewers of screen media.  Thirty percent of those 12 months old or younger have a screen or device in their bedroom.  When the phone vibrates, our teens answer.  They text more and communicate face-to-face less.  Family members gather in the same room of the house 16% of the time when they are home together.   The remaining 84% they are in their electronic cocoon, interacting with 21st century technology that has the potential to disintegrate the core values of family life.  It is now technology and the media that tells our children who they should become, how they should dress, and what they should believe. This is the result of extensive exposure to harmful commercialism.

Our children and teens can buy cigarettes and other toxic materials to be ingested such as alcohol and prescription drugs, on the Internet.  They can post enticing profiles and a false image.  They can text sexual messages, explicit photos and download pornography.  The media violence they witness on screens makes children believe the world is more dangerous than it is.  Ninety percent of the top grossing films contains freakish content and violence.  The main street media outlets incubate our children’s minds in sensationalized content that represents the dark side of humanity on a 24/7 basis.  Seventy five percent of prime time television shows contain sexual content without any mention of rights and responsibilities.

We seem to have become a culture that walks past others without acknowledgement, barely looking up from the screen.  In 2009, our children spent more than 32 hours a week on screens, despite knowing that the more time engaged with screens, the more dependent on screens they become.  Today, it seems that children prefer to lead an existence tethered to a screen.  According to the research, our teens spend more time engaged with media or technology than any other activity except sleep.  On average, those 8-18 years old spend 7.8 hours a day on screens.

Since 1972, we have known that there are many aspects of brain anatomy and chemistry that becomes significantly altered by the lack of the right stimulation during the right developmental periods.  In 1987, Dr. Harry Chugani, a neurologist, measured the changes in metabolic activity of children spending time on screens.  The changes directly and negatively influenced their development and use of language and social competence.  Since the use of language and the development of an expansive vocabulary are the foundation to early reading development, there has been a reported increase in delayed reading acquisition.  It is important to think about what does not happen when a child is on a screen – the hundreds of thousands of words not spoken, the questions not asked or answered, and the conversations not had.  Since children develop emotional and social competence through face-to-face interactions with their peers, we have witnessed a decrease in the development of self-regulation and social skills.

Technological advances have become one of the best ways to avoid developing emotional intelligence.  And perhaps Karl Menninger, a child psychiatrist was right when he said, “What we do to children, they will do to our society.”   Are we really interested in raising and educating children to become adults with little or no emotional and social competence?  Are we really interested in stunting the development of the frontal lobe of the brain, freezing individuals in adolescence with its increasing seeking of risk and attitude of despair, as well as decreasing empathy, control over impulses, decreasing problem-solving abilities, creativity, planning, and judgment?

By the time children are ten years old, every hour spent in front of a screen as toddlers is associated with lower math and school achievement, reduced physical activity, and increased victimization of classmates.  School-age children with 2 or more hours of daily screen time are more likely to have increased social and emotional difficulties, including hyperactivity, anxiety, depression, suicide, and anti-social behavior.  According to a study at Yale University, “Technology has supported the development of a psychological orientation characterized by shortened attention span, a lack of reflection and mindfulness, and an expectation of rapid change in the broader environment.”  Hours of screen time has been linked to irregular sleep patterns in infants and toddlers, and sleep disturbances in preschoolers and children 6-12 years old. The fast-moving games have addictive properties.  Dopamine, a neurotransmitter associated with pleasure and alertness, is released in their brains in a manner similar to its release after the consumption of some addictive drugs.  For each hour on a screen, children, on average, consume an additional 167 calories, increasing the risk of obesity and physical ailments.  According to Bank Street College of Education, “There is a decrease in imaginative play and an increase in aimless running around, non-engagement with learning, low frustration tolerance and persistence, and confusion about fantasy and reality.”

These are some of the known dangers.  Today, scientists are trying to understand what is still unknown.  One such discovery is that our children’s brains are much more sensitive to electronics use than most of us realize.  Yet, many adults mistakenly believe that interactive screen time – the Internet or social media, texting, emailing, and gaming, – isn’t harmful.  As stated above, interactive screen time is likely to cause physical, psychological, social and cognitive disturbances because it’s more likely to cause compulsive use.  Technology is no longer a tool our kids use, but has become a tool that uses them.  Yet, there is no evidence that introducing screen technologies to young children means greater adeptness later on.

So what does the science say about raising and educating children that thrive?  “Developing children thrive when they are invited into give-and-take conversations with adults that listen; when they are read to, and played with.”  They need time for unstructured play and hands-on exploration and investigation of the world that surrounds them.  Children thrive outdoors where all their senses are awakened and they experience spontaneous joy.  Perhaps it is time to galvanize all stakeholders toward a sustainable and systemic change that is led by parents, educators and inspired communities – a change that frees our children from the dark side of technology.  Can we count on you, because your children are?

The next segment of this series will address the influence of social media.

Why Have Indoor Plants In Your Learning Environment?

How To Dress for Nature School in Massachusetts

Behaviorism or Constructivism “Is it possible that our children are not really as well educated as we would like to think?”   Now that millions of parents have been forced to become their child’s educator during the COVID-19 pandemic, perhaps …